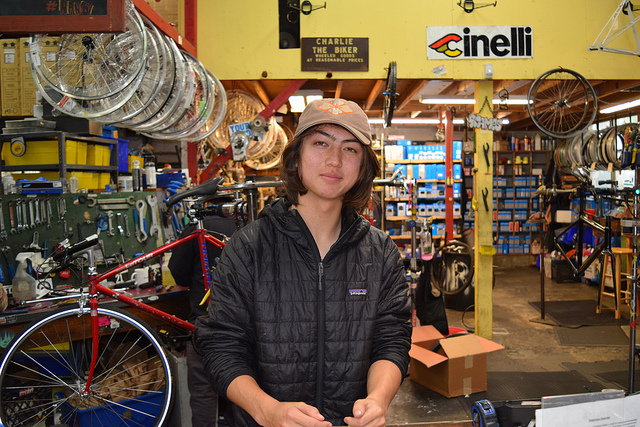 Baxter at Pedal Revolution. He's now a senior intern at the bike shop after graduating from the New Door Employment Program.

Baxter is known at Pedal Revolution as someone who’s passionate about bicycles and also as one of the bike shop’s reliable employee. And though he’s always loved bicycles, he says that the latter hasn’t always been true.

“I learned how to be reliable and accountable at New Door,” says the seventeen-year-old.

Baxter says he’s had a history of struggling with timeliness, recalling that he was late to school every day. His tardiness led him to drop out of high school take on work as a rock-climbing coach and a bike messenger, where he delivered legal documents downtown. Baxter knew that ultimately, he wanted to become a bicycle mechanic. He’s always been fascinated with bikes and bike culture, even building eight of his nine bicycles himself.

So, when a friend told Baxter learned about New Door’s Employment Program and he learned that he could intern at the social enterprise, Pedal Revolution, he knew that it was the perfect opportunity.

On the first day of his three-month internship, Baxter felt immediately at home.

“As soon as I stared my internship at Pedal Revolution, I felt like a had a connection with my co-workers,” he says. “They were teaching me things that I wanted to learn. Nothing felt forced.”

Baxter broke his wrist during his internship, but despite the injury was determined to finish the program. After taking off two weeks to heal, he returned with an even stronger drive to succeed. Not only did he graduate from the New Door Employment Program, he was selected to become a senior intern at the bike shop. These coveted internships are offered to youth who show tremendous growth and potential.

Baxter is proud of all of the professional skills he’s attained in the last six months, as well as the fact that he hasn’t been late to a single shift at Pedal Revolution. He credits his desire to learn everything he can from the shop’s knowledgeable staff as one of the key reasons for this change.

Baxter also contributes his success to his case manager, Randy, who helped keep him on-track while always lending a listening ear.

“My case manager is a relaxed person,” he says. “Meeting with him is like meeting with a friend.”

“Baxter has demonstrated exceptional communication skills by building healthy relationships with his supervisor and his colleagues,” he says.

Baxter continues to seize opportunities through New Door and is currently enrolled in New Door’s Education Program, where he plans to earn his GED so that he can eventually attend bike mechanic school.