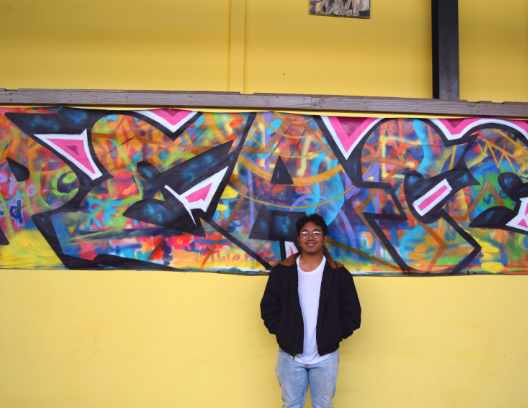 “Darien was extremely quiet and contained when he first joined the Employment Program,” shares Rhea, his case manager, “but began to find and share his voice as he progressed in the program.”

The 17-year-old’s internship was at Truve Fitness, and part of the role required that he speak and interact with gym clients and co-workers. At first, Rhea says, Darien struggled with this aspect of the job.

“But with encouragement and coaching,” she continues, “he began to open up and build trust with me, his supervisor, coworkers, and clients at Truve. And also with his cohort- so much so that he was willing to recite a very deep and personal poem at their graduation!”

Darien received a glowing, final review from his job site supervisor, and was even given responsibility for training the next intern who would be stepping into his role.

“It was beautiful to see Darien step out of his shyness and find confidence and clarity during his time with us,” Rhea says, “and I am so excited to see what is next for him.”

Now that he’s graduated from New Door, Darien is looking forward to starting his senior year at Oakland High, saving up for college, and realizing his dream of becoming an emergency room surgeon. Here’s what he had to say in his own words about his experience at New Door, the lessons he’s learned, and his plans for the future.

Finding his way to New Door:

Before New Door, I was a junior [in high school] and didn’t have that much money in my wallet. I never worked, had a job, or held an internship position. When I heard about New Door, I decided I wanted to try something different and be paid while doing it. I really wanted the opportunity to learn how to behave in a work environment. My siblings didn’t have this type of program growing up, and I knew New Door was offering something they couldn’t teach me

I discovered New Door from a friend. We were supposed to do it together, but I ended up doing it by myself. I didn’t want to back out because I knew it was a good opportunity, and I met some cool people from the program itself, case managers, and other cohorts.

Coming in my first day of orientation, I knew no one. It was all people from diverse backgrounds, some of them a lot older than me. I thought it would be all high school students, and it caught me off guard. And on top of that, I got there late.

Our cohort got really close, and it was like another family. We saw each other a lot. The first two weeks of orientation before the internship [we saw each other] three days a week. It was awkward at first, but we started to get used to each other and eventually became good friends. We made sure we stayed connected afterward. We exchanged contact information and our Instagram accounts. We were super diverse, but we all clicked.

The workshops were really good, and I really liked them. We learned a lot and it wasn’t boring. It was actually fun because of the people and the case managers.

The most important thing I learned about was communication. Even though it seems like it’s common sense, you really have to make sure you always communicate. This is true about life in general, relationships, love, and family. Communication is important because it shows if you’re a responsible person. If you don’t communicate, it will cost you your job.

The volunteer workshops were also really useful. Those workshop days were the ones I really enjoyed. Before I joined to New Door, I applied to other positions who asked for a cover letter and resume. I didn’t know what a cover letter was or how to make a resume. My friend told me to do research online. But doing research online is different than talking with people who can teach you through their experiences, give you examples, and help you make it. New Door was there with these workshops already, so I soaked in the information.

I interned at a small gym in Oakland. I really liked my supervisor, especially her way of teaching. She was strict but also a fun person to be around.

On the first day, I learned how to communicate. I was running 5 minutes late, and [my supervisor] immediately told me to communicate if I’m going to be late. Then she told me all the things I needed to do that day, gave me a paper explaining how to do it, and sent me off to work.

In the beginning, she watched over what I did. But soon she let me be independent, and it was nice because I had to learn from my mistakes. Which is a really good way of learning.

In the first month of my internship, I was really shy, [but then] I became more comfortable. I started to get to know the other people who were working there, the other adults, and have actual conversations with them. I began putting myself out there and talking to my coworkers and clients.

I learned to communicate with adults from working at the front desk, checking people in, and talking to customers. And even though they were adults, they were fun to be around. Most of them were surprised to find out how young I was and told me that I am mature for my age.

Rhea was my case manager, and she helped me a lot. At New Door, instead of having one case manager for tons of people, you have one case manager for only a few. I really appreciated the undivided attention and it was great to have someone who could help me get what I needed. At school, we have one counselor for 500 students. But Rhea could get to know me and asked questions about my life.

We worked on my post-internship goals, my college plans, and next jobs. I want to work and save for college. And I want to enjoy my last year of high school. I want to make sure that I don’t work too much and not enjoy high school. In college, I want to get a medical degree and become an ER surgeon.

On his biggest challenges and accomplishments:

Being able to juggle between the internship, school, and my life was difficult. I would get home late, and I really like to play video games, so, when I got home, I would want to play an hour of video games, do my homework, and fall asleep. For me, it was about learning to have good time management and making sure I got important things done and then having fun later. Like today, before this interview, I was playing video games, and I knew that I had to be done play by a certain time, so I could get ready and make it here on time. I got here 10 minutes early. If I showed up late, you would think I didn’t care about this interview.

My biggest lesson was to always communicate my needs to my supervisor. My biggest accomplishment was getting a job on my own. I got my job by making a connection and seizing an opportunity with a manager

The importance of New Door:

New Door Ventures teaches you everything that no one else, including your family, will teach you. This program gives you the one-on-one attention you need and the fundamentals to work in a job. And they help with other things like therapy, resumes, college, and what to do after your internship. They want you to stay connected and succeed.

If you’re interested in helping out young people like Darien, volunteer at one of our upcoming workshops or support our program.