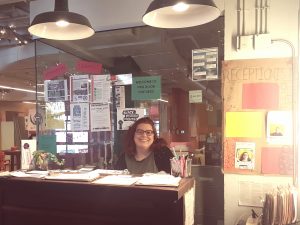 Claire is well known around New Door for her confidence, strong work ethic, and willingness to always lend a helping hand. She’s a strong believer in giving back to those who have helped her along the way, as she’s had to overcome many obstacles to arrive at the positive place she is today.

When she was 20 and studying at San Francisco State University, her mother passed away. She took a semester off to process her grief, and ended up failing out when she went back.

“I wasn’t ready to go back,” says Claire. “No one told me that it was ok to take a break. After the passing of my mom I basically spent two years in bed.”

Claire fell into a deep depression during those two years. She tried applying to entry-level jobs, but she felt unprepared and unmotivated.

“I couldn’t even return a phone call to set up an interview,” she said.

But, after learning about New Door from a family member, she was hopeful that the program would be able to provide her with the support she needed to take the next step in the professional world.

Still in what she called a “grief bubble,” Claire’s only goal at the start of the New Door Employment Program was to try her best.  Claire remembers her first day of orientation feeling like summer camp due to the high energy of a New Door case manager named Mel. She attributes Mel’s support to a lot of her successes in the program. Despite feeling a little anxiety during the first few case management sessions, over time, Claire began to notice a change in herself.

“It turned out Mel’s energy meshed with mine,” she says. “In fact, I siphoned some of hers.”

Along with personal confidence and growth, Claire noticed positive professional changes, too.

“I walked into this building thinking no one starts one time,” she says. “In three months, New Door taught me the importance of showing up and showing up on time.”

One week after graduating from the Employment Program, she was asked to apply for the youth receptionist position at the New Door office in San Francisco. She was hired on shortly after. The first month as a youth receptionist Claire was still shy. Though she had opened up to her case manager, social interactions were still a daunting task. However, day by day she was faced with interactions that she normally would run away from, like phone calls and greeting everyone who entered New Door.

“By month three I was laughing and opening up to people, just being the rockstar that I am,” Claire jokes.

Mel echoes her kind character. “Claire was an invaluable youth receptionist, but what really stands out is her thoughtfulness. Claire goes above and beyond to show support to her peers and coworkers.”

She’s now happily working full-time as an independent contractor with a tech company. Although Claire has moved on from New Door, she is still an active member in the community, often visiting the office and attending events.

“New Door showed up for me when I was at my lowest,” she says. that’s why I show up and show my support.”

Claire’s turning point was when she realized that the whole office had her back. New Door staff wanted to see her succeed, not only as a youth receptionist, but in life. She recalls that, in the beginning of her journey, she felt like a fragile egg that would crack under pressure. “Eventually [in a way], I did crack open,” she says, “but it’s what I needed to break free from old habits.”