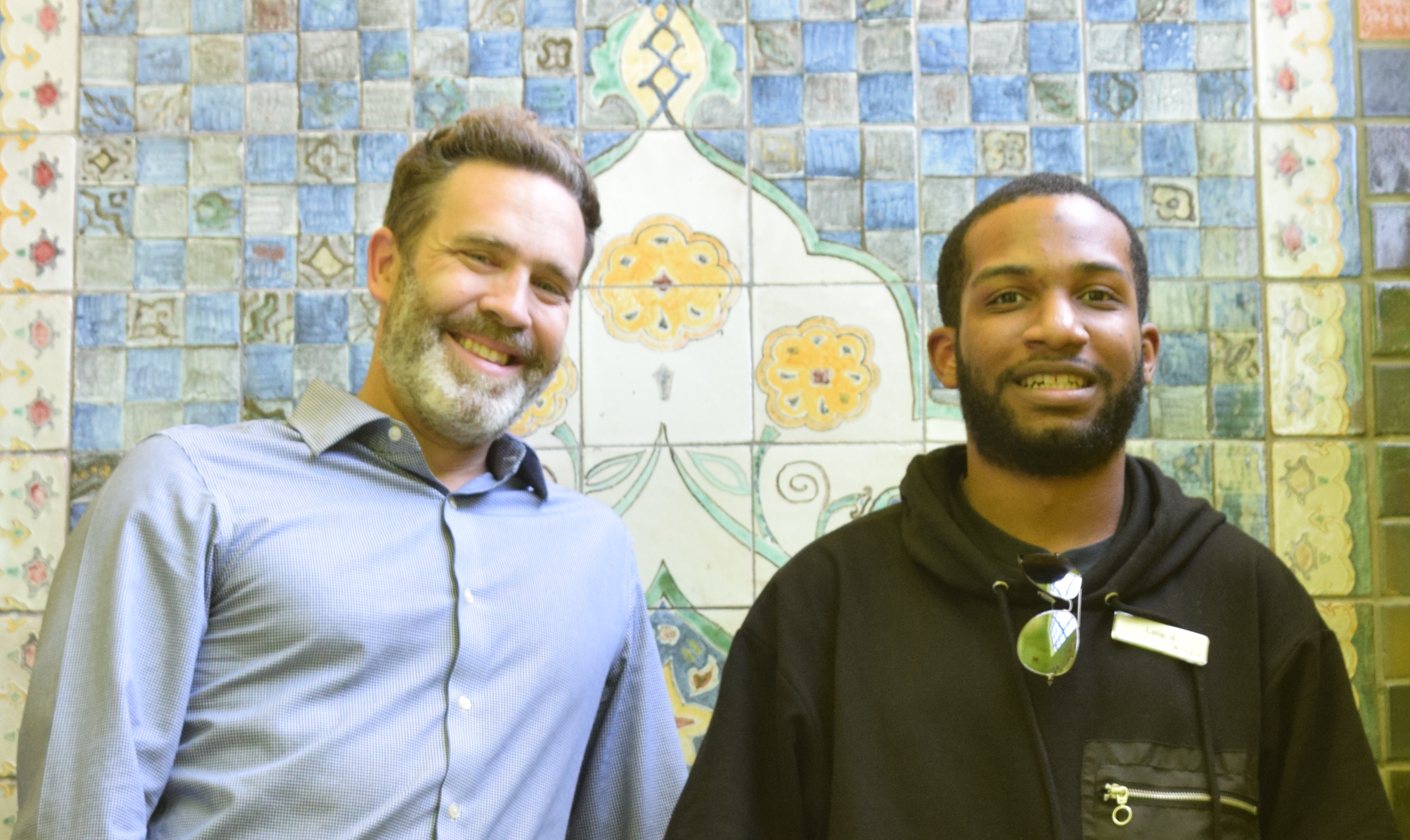 Leland came to New Door very clear about his career and education goals. He was pursuing a certificate in computer programming at City College and working at McDonald’s at the time– and when a friend told him about New Door, Leland saw an opportunity to gain greater work experience and job skills. Now, one year after starting New Door’s employment program, Leland proudly dons his name tag from Macy’s Department Store, where he is a full-time employee while also continuing college.

Coming to New Door from an unstable living situation, Leland’s initial priority was to secure a job, any job, that would provide him with the financial means to move into a better place. But under the mentorship of his case manager at New Door, Leland decided to focus his efforts on finding a more suitable career for his long-term goals.

To help Leland grasp this concept, Leland’s case manager Jon, gave an example using carrots. “Say you were given two choices,” explains Jon. “One option is carrots. You could eat all the carrots now, as much as you wanted… but it would mean that you could only eat carrots for the rest of your life… OR you could hold out for the second option, which is to choose whatever you wanted to eat – steak, french fries, pizza! But it would mean that you had to wait longer for your meal.”

The carrot metaphor stuck with Leland. While at New Door, he decided to stay in his current housing until he could find a job that was more aligned with his long-term goals – ideally, a position that would offer flexible hours around his school schedule, as well as growth opportunity.

Certified in C++, Java and C# programing, Leland is passionate about technology. For his New Door internship, he was excited to be placed at an electronics company that rents and sells photography gear, wearables, drones and audio equipment. Leland’s job as an intern was to collect market research – and according to his supervisors, he did so with flying colors.

“It’s important to always ask questions,” Leland says, reflecting on the lessons he learned as an intern. When his supervisor gave Leland feedback that he could work on connecting more with the company’s culture, Leland pushed himself to be more intentional about socializing in the workplace; a naturally introverted person, he went beyond his comfort zone to build stronger relationships with co-workers.

As part of the Huskies cohort, which ran from August to November 2016, Leland attributes his success in part to his fellow interns. “I think you are more likely to succeed because everyone [in the cohort] is doing the same thing you are: working and learning,” he says. “You hear the struggles and challenges of others and support each other.”

Leland emphasizes that in order to gain job experience, one has to chase it. “Take initiative,” he advises. “Because things aren’t going to be given to you.” And Leland certainly practices what he preaches. In June, upon completing New Door’s employment program, Leland earned his well-deserved programming certificate through City College.

Armed with what he learned at New Door and through his internship, Leland was able to transfer these skills to his current job. While participating in a job skills workshop at New Door, Leland wrote a cover letter that eventually landed him his current full-time position as a merchandiser at Macy’s. Leland now has the flexible hours, benefits, and opportunity for growth that he held out for — and he is in a much healthier living situation.

Looking ahead, Leland plans to continue studying programming at a four-year university; he would also like to minor in his other passion, music theory (specifically voice training and piano). Leland’s dream is to start his own computer gaming company, creating his own games and programs, or to work for a prestigious gaming company like Blizzard.

“His skills were already there,” adds Jon, Leland’s case manager, proudly. “He just needed to understand what obstacles were in front of him, what was causing them, and how to get over them. [New Door] helped him understand his challenges… and he overcame them.”